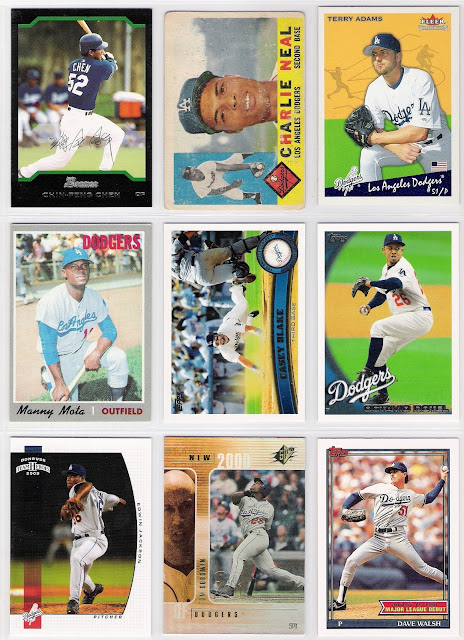 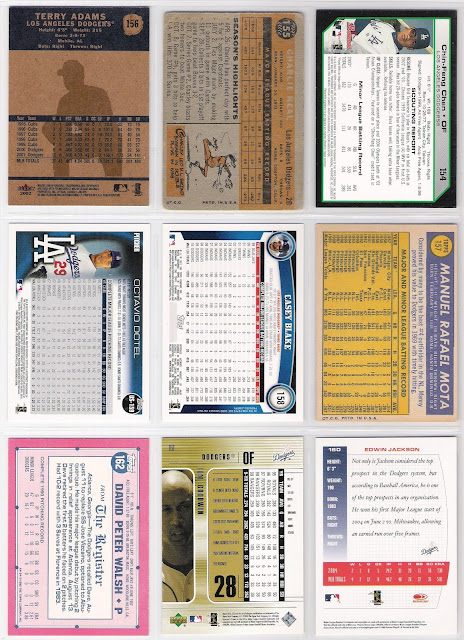 there are a few strange or unusual cards (mostly errors) that received strong consideration for the set.  while the 1989 upper deck brian holton/shawn hillegas card did not make the set, i knew i wanted either the 2000 sp authentic or the spx tom goodwin/adrian beltre card in the set from the get go.  yes, that's adrian beltre batting on goodwin's card, with goodwin in the inset photo.

there was a time when chin-feng chen was my baseball salvation. then it was joel guzman and then matt kemp.  one of those guys lived up to the hype.  chen was out of the organization after the 2005 season with only 25 plate appearances under his belt.  charlie neal had more success with the dodgers.  his 1960 topps card was almost bumped to get wally moon's card from that set in at number 5, but i went with the '57 topps maglie there instead.

the 2002 fleer tradition adams card features a nice photo of the dodger pitcher suttoning. the dodgers had converted adams to a starter the previous season, and he was actually with the phillies when this card was released. fan favorite manny mota gets to represent the 1970 topps set, which is nice.  i started collecting in 1978 and soon thereafter went after dodger team sets starting in 1970, so this set is near and dear.  of the dodgers in the 1970 set, only mota, don sutton, and bill russell were still with the dodgers in 1978, so i was especially fond of their cards from that set.

the 2011 topps blake card features a pretty good photo, and i actually prefer the 2011 topps design on the horizontal cards.  the dotel card from the previous year's update set is the only card of him as a dodger that i am aware of.  it was not quite as much of a no brainer as the spx card, but i did want to get the well traveled dotel into the set.

i was at one of edwin jackson's early career starts.  it was in san francisco, and he held the giants scoreless in his six innings of work.  he gave up just two hits, but walked 8.  he struck out barry bonds twice, and hit him another time as the dodgers beat the giants 5-0.  it was a good day at the park, and i will give giant fans kudos for not hassling the many dodger fans like me who were in attendance. anyway, jackson's card here comes from the tail end of his dodger tenure, and i was surprised to find that he is still pitching (in miami) today. the marlins are jackson's 10th team, so he has a bit to go to catch up to mike morgan and dotel.

i wrote about the goodwin card before, so let's just go to dave walsh.  i liked the idea of these debut sets from the early 1990's as they were a vehicle to get me cards of new dodgers sooner, and they used as their basis the current topps flagship design.  not quite a traded set, but similar. it turns out that this set was a good thing, because walsh didn't get too many other cards. he was 1-0 for the dodgers in 1990 and that was it for his big league career.

there were a few other cards considered for these spots, including nomar garciaparra's 2009 upper deck first edition card 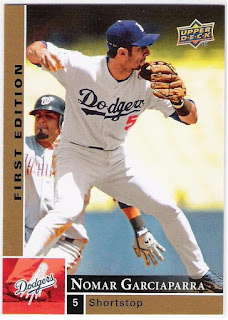 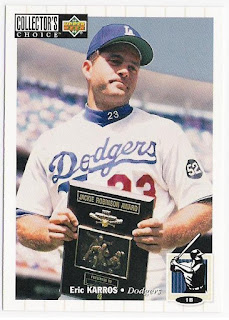 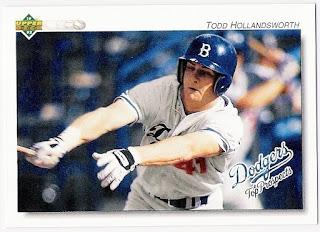 manny mota's 1970 topps card is my favorite here, for reasons mentioned above. the first "vintage" set i put together was the 1970 set, and it remains one of my favorites, due mostly to sentimental reasons.

seeing the neal and blake cards on this sheet make me think that i didn't try hard enough to get an all horizontal card sheet in the set.  shame on me.
Posted by gcrl at 9:55 AM