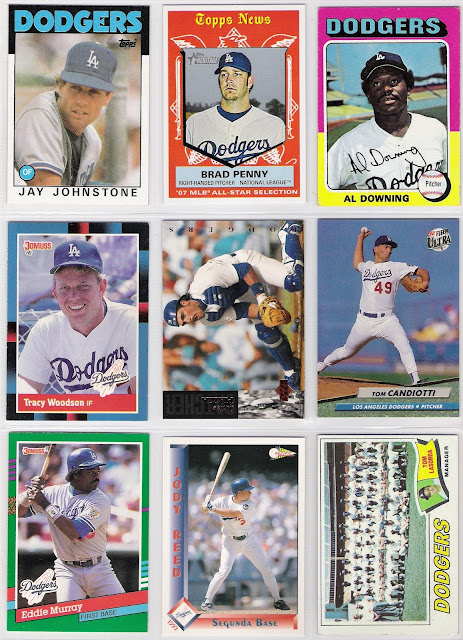 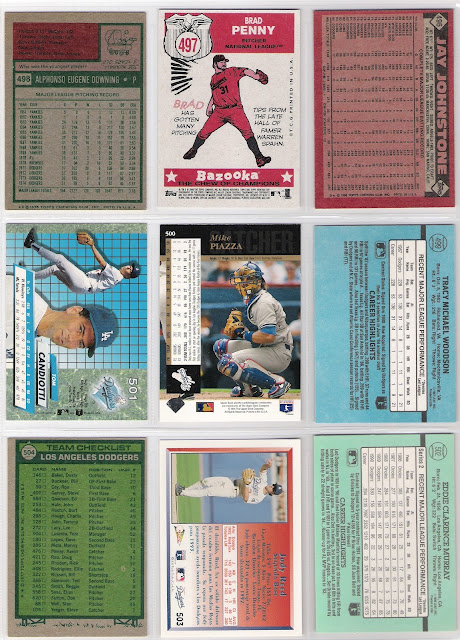 when looking at options for the hero number of 500, the 1994 upper deck piazza card stood out as the best (most reasonable) option - balancing duplicate availability with someone worthy of the number. that's as close to a no brainer as any of these cards are going to get.

jay johnstone was done as a big league ballplayer when his 1986 topps card was released. the previous season, johnstone had hit just .133 is 17 games in his second tenure with the dodgers, although he did make the postseason roster and had his final big league at bat in the nlcs against the cardinals.

brad penny earned an all-star card in 2008 topps heritage even though he wasn't the national league's starting pitcher in the 2007 all-star game.  that would have been jake peavy, who also won the 2007 nl cy young award (penny finished 3rd behind peavy and brandon webb).  penny had started the 2006 all-star game for the national league, becoming the first dodger pitcher to do so since hideo nomo in 1995.

it wasn't often that we got a posed photo inside dodger stadium back in the '70s or '80s, so i really like cards like this 1975 topps al downing.  it's also the reason i really like several dodger cards in the 1989 topps set.  downing's head is blocking our view of the three sisters palm trees, however.

tracy woodson and 1988 donruss make their first (only?) appearance in the frankenset.  both are pretty forgettable, although woodson has a world series championship ring and i do not.  in fact, his rbi groundout in the 7th inning of game 4 of the 1988 world series proved to be the game-winner, as the dodgers won that swing game 4-3.

mike piazza is preparing for a play at the plate on his 1994 upper deck card, which fills our fifth big hero number of the set.  piazza will be inducted into the hall of fame this coming weekend.  as night owl mentioned, it would have been nice for piazza to go into the hall with a team neutral cap, although i would prefer a backwards facing helmet!

there's not much to talk about regarding tom candiotti's 1992 fleer ultra card that hasn't already been said about other cards with similar images - dodger stadium, etc.  however, i will thank fleer for using a photo of tom with a knuckleball grip.  on second thought, perhaps it would be more interesting to see him with a different grip.

have you ever considered how much 1991 donruss resembles 1986 donruss? i hadn't until now, as i have not given much thought to 1991 donruss ever.  still, eddie murray's card here with the border design and the slanted bottom edge of the photo made me think of the max headroom set. 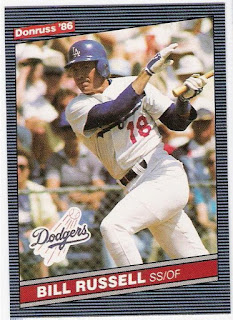 what do you think?

i took three years of spanish in high school, but i don't pretend to be able to understand the language. i used to find it curious that pacific, on jody reed's 1993 card and others, translated 'second' to 'segunda', but not 'base' to 'beis'.  after all, 'baseball' is 'beisbol' in spanish.  apparently that is all i know, because 'base' is 'base' in spanish.  apologies, pacific, for questioning your translation consistencies.

last card of the page is the 1977 topps dodgers team card that also features tom lasorda for the first time as their manager. it serves as the team checklist, too.  i am fairly wishy-washy about how i refer to this card. sometimes it's the team card, sometimes it's lasorda's card.  i would probably defer to it as the team card if i had to make a choice. for the purposes of this set, however, i am going to label it as a team card and a lasorda card. 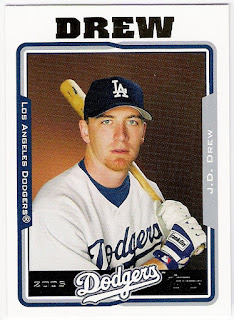 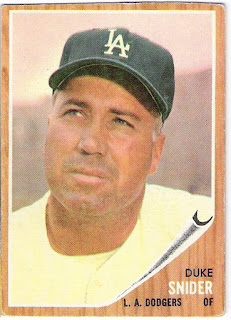 this is kind of a rough page, but i'll go with al downing's 1975 topps card as my favorite.  once again, it's tough to beat daytime at dodger stadium.

brad penny had a couple of pretty good season for the dodgers after coming over from the marlins in the paul loduca trade.  he was an all-star two seasons in a row, and his 16 wins were enough to lead the league in 2006.  i wonder, however, did he have another talent outside of baseball?  i wonder this because of what is written on the back of his card above: "brad has gotten many pitching tips from the late hall of famer warren spahn".  knowing that both penny and spahn were from oklahoma, it is easy to understand how the two would have had conversations prior to spahn's passing in 2003, but had i not known of their oklahoma roots, i may have thought penny was channeling spahn's spirit for some pointers based on the text.
Posted by gcrl at 9:55 AM