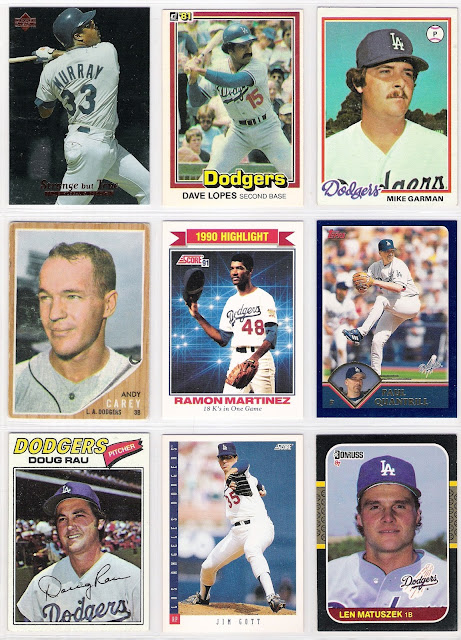 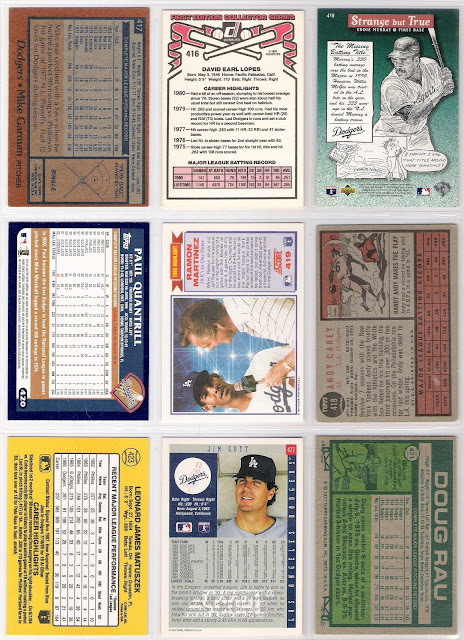 ramon martinez striking out 18 braves was certainly worthy of a highlight card from score, but the appearance of don drysdale on the back makes it a must for the frankenset.  no doubt that card was going to be in the set.

in 1990, eddie murray led the major leagues with a .330 batting average.  unfortunately, he didn't win the national league batting title that year because willie mcgee was hitting .335 when the cardinals traded him out of the league and to the a's.  he hit .274 for oakland, and his aggregate average dropped to .324.  anyway, this 1996 upper deck card is all about this 'strange but true' occurrence.

have you ever looked at 1981 donruss and 1978 topps next to one another? well, you are now thanks to the numbering of the dave lopes and mike garman cards.  notice anything? i see many similarities between the two designs, and for the dodgers, that includes the red framing of the photo. i am too lazy to go and compare the colors used for all of the other teams between the two sets, but i do know that both used red for the a's as well.

it seems like it's been a while since we've had a 1962 topps card in the set. andy carey's 1962 topps card should have been a phillies card as he was dealt to philadelphia by the white sox following the 1961 season.  carey refused to report, however, so the chisox sent someone else to philadelphia and traded carey to the dodgers instead.

score gave ramon martinez a card in their 'k-man' subset at number 408 and then followed that up with another ramon card that has to do with strikeouts here at 419.  this one is a highlight card recalling his 18 strikeout performance against the braves.  ramon had 4 outs to go when he got his 18th k, but didn't record any more after that.  still, that was good enough to tie sandy koufax's dodger record and get a postgame interview with dodger broadcaster don drysdale. major props to score for putting a photo of big d (whose career high for strikeouts in a game was 14) and ramon together on the back. i wish upper deck had done a similar thing in 1989 with a card celebrating orel hershiser breaking drysdale's consecutive scoreless inning streak. drysdale was in san diego that night, and he congratulated orel in the dugout after the game. upper deck did use a photo from that game on orel's nlcs mvp card, strangely enough.

2003 topps makes for great dodger cards with its blue borders as evidenced by this paul quantrill card. quantrill, by the way, was drafted by the dodgers in 1986, but did not sign.  he joined the dodgers after leading the american league in appearances in 2001 and promptly led the national league in that category for both of his seasons as a dodger.  then, for good measure, he led the league again in 2004 with the yankees.  quantrill holds second (89 games) and third place (86 games) on the all-time dodger leader board in that category, behind only dr. mike marshall and his 106 appearances in 1974.

doug rau and jim gott have been in the set before, and there's not much new to say about either of them. 1977 topps has been pretty well represented, too, but i think this is the first time we are seeing 1993 score. i like the angle of the photo used on gott's score card - the background is half pavilion/half bullpen - but it's not as sharp as a card as we will see in a few pages.

last but not least (or, maybe least) is len matuszek's 1987 donruss card. matuszek will always be to me al oliver 2.0.  the dodgers traded for oliver prior to the 1985 season, and i was somewhat excited to see him in a dodger uniform.  however, oliver underperformed and was dealt to the blue jays in july.  it seemed like al campanis had a quick hook for oliver which disappointed me.  anyway, matuszek was the guy who the dodgers received in return, and he really wasn't much different than oliver at the plate.  i never really warmed to matuszek as a dodger because i was a bigger fan of oliver, but neither the dodgers nor the blue jays made it past the league championship series that year, despite both teams having a 2 games to none advantage, so i guess it doesn't really matter much and i should get over it 31 years later. 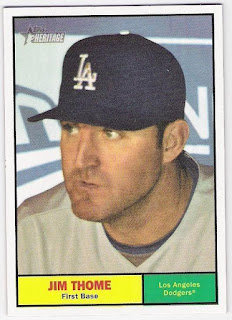 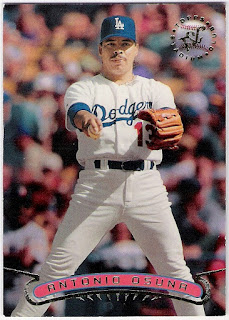 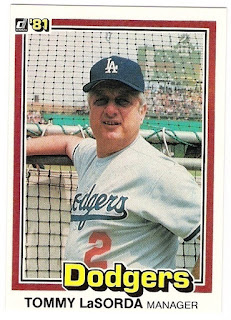 i really like having a card that addresses eddie murray's lost batting title, and the lopes and garman cards are likable, too.  however, the don drysdale appearance on ramon martinez's 1991 score card puts it over the top and makes it my favorite card on this page.

while the 1981 donruss design is similar to that of 1978 topps, i don't hold it in quite the same esteem.  and, i didn't go crazy for it when panini issued some cards last year with the design.  however, i do have a master 1978 topps set going.  in addition to the 726 card set (and its o-pee-chee counterpart), i have collected cards with the 1978 design that are different from the flagship set, such as the willie montanez topps zest card, the variations in the burger king astros, rangers, tigers, and yankees sets, as well as the cards with that design that have been featured in the fan favorites sets over the years.  i believe that i am only missing a doug decinces auto from 2003 fan favorites.  anyway, steve at white sox cards recently pointed out that topps is going to issue 'birth year' cards as an insert set in update this year.  as part of a blog bat around in 2009, i had proposed doing cards in the design of current players' birth years as a way to appease the active player requirement in an archives type release, while also including final tribute cards that should have been of former players. steve has produced dozens of birth year cards for white sox players since then - popularizing the idea in my opinion. it doesn't look like he'll get any sort of credit, which is too bad.  as for me, i'm just hoping that there is a chase utley card in the set since his birth year is - you guessed it - 1978.
Posted by gcrl at 9:55 AM