what can stop the determined heart and resolved will of [a collector]?

the character robert walton asked the above question in mary shelley's classic novel "frankenstein", and i have found my heart and resolved will leading me to the creation of a monster of my own.  yes, i've put together a dodger frankenset.

this is a complete 726 card set (because that's how many were in the 1978 topps set, which was the first year i collected) of nothing but dodger cards.  there are cards from 1957 through 2016 in this set, and thanks to the 1990 target dodgers set, i was not shut out by any card number.  for the first 20 pages (180 cards), there are no duplications of sets or players, with the exception of the hero numbers of 100 and 150.  i could have gone the first 21 pages (that's 189 cards) without duplication aside from the hero numbers, but i decided to include another steve garvey card at 185.  i tried to avoid cards from the same set or of the same player on the same sheet, but it got difficult towards the end and so, for now (and the foreseeable future), there are a couple of sheets where this was unavoidable.

just as was the case with my flagship blog, this has been a way for me to connect with my collection, although this time it was with many of the common dodger cards (and doubles) that make up such a large part of my trove of cards.  i have to say, i am pretty pleased with the way this set turned out.  so much so, that i answered the following question shelley asked in her classic novel with a resounding "yes!":

"had i right, for my own benefit, to inflict this [set] upon everlasting generations?" 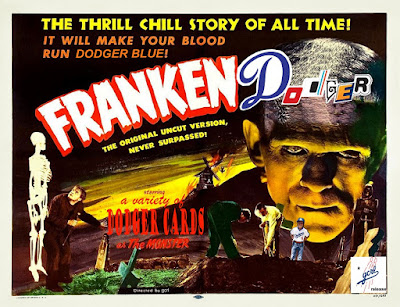 and that's why this blog exists.

i had planned to get things started june 1st, but i've gotten ahead of schedule, so it's looking more like may 2nd (or sooner) as long as i can get the scanning done. either way, stay tuned for 81 posts featuring dodger frankenset goodness!

it will make your blood run dodger blue!
Posted by gcrl at 9:55 AM